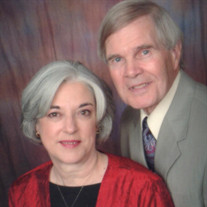 With grateful hearts we remember the lasting influence of his life on ours. Russ was born in St. Louis, MO to Edward and Marie Swekosky on February 10th, 1938. He attended Holy Family Catholic School, St. Mary&#8217;s High School,... View Obituary & Service Information

The family of Russell Edward Swekosky created this Life Tributes page to make it easy to share your memories.

With grateful hearts we remember the lasting influence of his...

Send flowers to the Swekosky family.