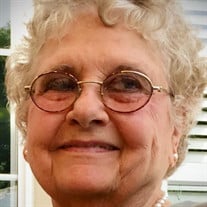 Ruth Imogene “Jean” Christenson passed peacefully at age 97 in Tulsa, Oklahoma on March 22, 2022. Jean Christenson was born, Ruth Imogene Chase to William J. Chase and Rhoda May Steward on March 11, 1925 in Goodman, Missouri. Her father worked in the coal mines after he was discharged from military service in WW I. As result of his work in the coal mines, he contracted TB and passed away when Jean was five years old. Rhoda May, exposed to TB caring for William, died when Jean was ten years old. Jean and her older sister, Irene lived with their uncle and aunt, who moved to Donna, Texas. After graduating in 1942 from Donna High School, Jean moved to Los Angeles and moved in with her sister, Irene. In May of 1943, Jean met Lawrence “Larry” E. Christenson on a blind date. Larry had enlisted in the Army Air Corp and was completing his cadet training in California. They were married on September 23, 1943 in North Hollywood, California. Completing his flight crew training as a B-26 navigator-bombardier, Larry left for Europe in February of 1944. Jean moved to Kansas City, Missouri and found a job at Pratt & Whitney. In 1945, Larry return to Kansas City and they began their family – Larry (1947), Carolyn (1949) and Terry (1954). In 1951, Larry was recalled to active duty for service in Korea flying the B29. Jean stayed home raising three children. In December 1959, she began working in the accounting department of TWA. Utilizing her employee passes, Larry and Jean took many trips to faraway places creating tons of lasting memories. In 1983, Jean retired from TWA. In May 1996, Jean and Larry moved to Tulsa to be near Carolyn and Terry. Larry passed away on May 24, 2013 – four months shy of their 70th wedding anniversary. The following year she moved to Country Club of Woodland Hills. a senior living community. In 2018 she moved to Forest Hills Assisted Living. At both senior communities, Carolyn and Terry decorated her apartments with many of Jean’s craft projects, family photos and memorabilia. Jean was a wonderful friendly, caring, kind person always welcoming friends and new neighbors. She is survived by her son, Larry Christenson of Cupertino, CA., her son, Terry Christenson of Tulsa, and her grandson, Alex Christenson of Los Angeles, CA. Her husband, Larry, a World War II veteran passed away on May 24, 2013 and is buried at Floral Haven Cemetery, “Avenue of Flags”. Her daughter, Carolyn Jean Jones passed away August 4, 2022 and is also buried at Floral Haven Cemetery. The family requests donations in our Mother, Father and Carolyn’s names be made to the Shriner’s Hospitals for Crippled and Burn Children. Rest in Peace Mom. We Love you.

The family of Ruth Imogene "Jean" Christenson created this Life Tributes page to make it easy to share your memories.

Send flowers to the Christenson family.