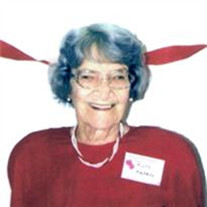 Ruth Kathryn Barnard Kearns was born March 20, 1917 in Sand Springs, Oklahoma to Charles L. Barnard and Birdie Tennessee Miles. She is survived by her children: daughter, Carol Snyder Makaula and husband, Sonny, son, Brent Kearns and wife, Edith and Son Chuck Kearns; five grandchildren, Dean, Justin, Jason, Carrie, and Jeff Kearns; ten great-grandchildren, Eric and Maria Snyder, Jessica, Ben, Keeley, Ian, Eli, Caleb, Seth and Nathan Kearns; two sisters, Anna Laura Adams and Jean Ingold; and brother, Burl Higgins. Ruth was married to Albert Craven in July of 1939 and had a daughter Carol. Albert was killed in an auto accident in October of 1941. She later married Sherman Kearns in December 1944 and had two sons. She spent her time as a homemaker and loved to garden. Her flowers were always beautiful and she would love to show you around her yard. She passed this love of gardening to her son, Brent and grandson, Dean. She loved fishing, traveling and all the family parties and especially the Senior Center at Joe’s Station. She attended the Center for 25 years and did lots of volunteering. She attended New Home Free Will Baptist Church with her daughter, Carol.

The family of Ruth Kathryn Kearns created this Life Tributes page to make it easy to share your memories.