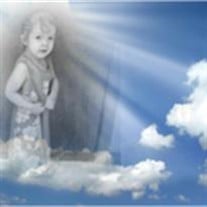 Rylan “RyBaby” or “RyBurger” Faith Caffey was born on July 17, 2009 in Tulsa, Oklahoma, to Ryan Caffey and Holleigh Cloke and passed on into her eternal life on May 31, 2012. She is survived by her parents, Ryan Caffey and Holleigh Cloke of Tulsa, Oklahoma, her big bubba Westin and two big sissies Aunna and Amira Caffey, Papa Kevin Cloke of Eldon, Iowa, Nana Michelle Cloke of Collinsville, Oklahoma, Grandpa Pat Bunch and many Uncles, Aunts, cousins and friends who will forever remember and celebrate the love she shared during her life. She is proceded in death by her GranGran Minnie Pearl Jones, Grandma Beverly Ann Cloke, Great-Aunt Becky Cooper, Cousin Gary David Cloke and many more. Â  Rylan Faith was a beautiful, blue eyed, untameable curley haired baby angel who was normally only wearing her diaper because she never wanted to keep her clothes on. She was known to all as very brave knowing no fear of anyone or anything, sweetly mischevious where no candy or unguarded drink was safe. She loved to dance and play with her brother and sisters any time of the day or night and would out dance them all. Rylan would always greet you with a sweet “hey you” and had a very sweet but onery smile that would tell you that she had just done something that she was not supposed to. One of her favorite past times was creating beautiful works of art on every surface and wall she could find and loved to show them off to all those around her, once she decided she wasn’t going to get in trouble. Rylan was fierce and didn’t hesitate to save her baby dolls from the hands of any who messed with them, and after she had won the battle to get them back, would make sure that those who had wronged her babies would think twice after being tackled. Rylan found so much enjoyment by digging in the dirt with her hands, waiting for her families back to be turned so she could raid the snack stash or steal their drinks, arguing, wrestling, honking noses, high fives and picking flowers. Her favorite song was “I’m Sexy & I Know It” but she loved music of all kind. Rylan will forever live in the hearts and memories of all those she touched in her life with her strong will, hilarious comments, beautiful smile & innappropriately passionate kisses. Â  She was the baby of her family but the leader, boss & dictator of them all. She was so tiny in size but would stand against a grown man to defend her older siblings, Momma & Daddy. She could pack a punch & didn’t mind throwing down, in fact, she loved to fight. She was a fighter in every sense of the word. She loved to play kiss fights between Momma & Daddy every night.Â  She never said no to hugs & kisses from either but occassionally Momma got hit after she received her kiss! She knew how to bat her eyelashes & get her way with Daddy, a perfected art of hers.Â  Rylan was the shot caller of the Caffey Crew, if she wanted something then she stopped at nothing to get it. She was definetly Daddy’s little girl & Momma’s little tyrant. She loved to steal any and every drink & meal from her Momma, arguing with Momma, another perfected art of hers. She was the light of the family & there was never a dull moment when she was present. Â  Rylan was a go go go all day & night party animal, all or nothing, sporadic, sassy, confident, independent & loving, sweet baby girl. She owned every room she ever walked into & the hearts of everybody she ever came into contact with. Rylan will be forever missed by all those who knew & love her. For those who did not get the priviledge of meeting her were robbed of an unforgettable little girl in their lives. No question that Rylan is in Heaven teaching her loved ones that were waiting there for her how to dance & making them laugh uncontrollably.

The family of Rylan Faith Caffey created this Life Tributes page to make it easy to share your memories.