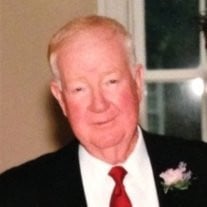 Sammie Ray â??Papaâ? Goodman was born on March 30, 1930, in Beggs, OK to Venita and James Goodman. He grew up in a house with his parents, four brothers, and four sisters. His father was a blacksmith and worked on oil rigs in the area. Growing up as a small boy, his father would take Sam with him on trips to see the rigs. Papa also loved duck hunting and fishing in Colorado. He attended Beggs High School, where he started dating his wife Berta (â??Nannyâ?) in the fall of 1947. They had known each other since elementary school, but they didnâ??t begin dating until the homecoming football game, where they were named homecoming king and queen. He graduated in 1948, and married Berta a few days later on June 16, at Beggs Methodist Church. Shortly thereafter, he and Berta moved up the road to Tulsa, OK. He worked various jobs after arriving in Tulsa, including selling shoes at Pennyâ??s, and selling cars at Bill White Chevrolet Downtown. Not long after, he began his career at American Airlines as an engineer, a position he held for 43 years. Loyalty to Papa translated into working daily at American Airlines for 40 years, rarely missing a dayâ??s work and being up early every day. Papa loved work, loved the camaraderie of problem solving, and took a great deal of pride in his contribution to the airline. Nanny and Papa had two daughters. Their first daughter, Jayme Sue, was born on February 8, 1954, and their second daughter, Mary Kay, was born June 19, 1958. Early on, Papa realized the importance of his special charge as husband and father to provide well for his growing family. His loyalty to his young family meant working two, and even three jobs. Home, family, his faith: Papa was all this and more. He loved traveling with his family, and particularly loved being outdoors, taking his family fishing at Lake Eucha and Roaring River in Missouri and on visits to Estes Park, Colorado and Bar Harbor, Maine. In their spare time, Sam and Berta enjoyed playing bridge together, hosting friends to play and socialize. They also enjoyed square dancing. Later in life, Papa loved to spend time at their cabin on the shores of Grand Lake, OK. He especially loved waking up early in the morning, making a pot of coffee, and watching the sun come up over the lake. Papa and Nanny did everything together; such was his loyalty to her, from the simplest evening meal, the Saturday morning household chores, and the wonderful annual vacations. Loyalty to Berta was steadfast, unwavering, and constant. His loyalty to his beloved wife extended, naturally, to his children. Taken together, they formed the source of his legendary discipline, his drive, and his motivation to become not only a good provider, but a great one. Religion and spirituality were also important cornerstones of Papaâ??s life. Rather than preaching religion upon others, he preferred to express his spirituality in his actions and behavior towards those around him. He was always full of love, kindness, and understanding. Papa passed away peacefully in his home in Tulsa, OK, on the morning of Sunday, June 23, 2013, surrounded by family and loved ones. He is preceded by his mother and father, three brothers (Kenneth, Quentin, and Lloyd), and three sisters (Doris, Elizabeth, and Martha). He is survived by his wife of 65 years, Berta Louise Goodman, his brother Jack, his sister Molly, his two daughters, six grandchildren, and three great grandchildren. Loyalty is just one of the many qualities that made Papa such a special person and someone we cherished and admired so greatly. Papaâ??s loyalty to his loving wife, Berta, was his driving force and all-consuming passion beginning with their first date as homecoming king and queen. They were a beautiful couple, and time did not tarnish or diminish their love for each other. A loving husband, father, grandfather, and great-grandfather, he will be missed by all, but his legacy will carry on forever in the lives of those who loved him.

Sammie Ray â??Papaâ? Goodman was born on March 30, 1930, in Beggs, OK to Venita and James Goodman. He grew up in a house with his parents, four brothers, and four sisters. His father was a blacksmith and worked on oil rigs in the area. Growing... View Obituary & Service Information

The family of Sammie Ray Goodman created this Life Tributes page to make it easy to share your memories.