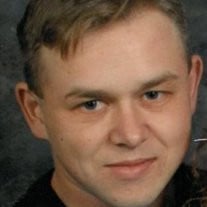 Shawn Ray Sherman passed away Tuesday, November 26, 2013, in Broken Arrow, Oklahoma, at the age of 41 after a long battle with Diabetes. Shawn was born on February 5, 1972, in Tulsa, OK. Shawn was preceded in death by his grandparents, Juanita... View Obituary & Service Information

The family of Shawn Ray Sherman created this Life Tributes page to make it easy to share your memories.