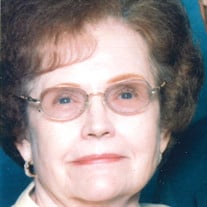 Beloved wife, mother, grandmother, great-grandmother, and friend, Shirley Mae Huebert went to be with Our Lord on March 7, 2022. She will be missed beyond measure, but will be reunited with her loved ones who preceded her on the journey to eternal life, her beloved husband, Dale, sister, Verlene, and parents Fred and Helga Jensen. Shirley was born on July 11, 1931 to Fred and Helga Jensen in Plainview, Nebraska. Shirley grew up on her family’s farm with her older sister Verlene. After graduating from Plainview High School in 1948, Shirley attended Wayne Teacher’s College for a year before moving to O’Neill, Nebraska where she worked as a bookkeeper. While living in O’Neill, Shirley met and fell in love with Dale Huebert. Shirley and Dale married on March 25, 1951, and relocated to Wichita, Kansas. Shirley proved to be an excellent homemaker, and the young couple soon welcomed their first son, Gene Scott on March 30, 1952. They welcomed their second son, Terry Lee, on March 24, 1962. In 1964, Dale and Shirley moved their family to Oklahoma City, Oklahoma when Dale was offered a position with Honeywell. In 1967, Dale and Shirley moved to Tulsa so that Dale could advance in his career with Honeywell. Dale and Shirley built their dream home in Tulsa, where they finished raising their family. Shirley and Dale were members of John Calvin Presbyterian Church. They had an active social life within their circle of friends. They enjoyed playing cards, camping, boating, and entertaining friends and family. Shirley enjoyed painting beautiful ceramics, many of which decorated her home, while others became treasured gifts to friends and family. Shirley had excellent taste, and her home was always beautifully furnished and welcoming. After their sons were grown, Shirley found herself with too much time on her hands which led her to seek a position with Children’s World Daycare Center where her caring and nurturing spirit made her a favorite of children and coworkers alike. Shirley continued to work at Children’s World until Dale retired. Often Shirley and Dale would take their grandchildren, Jamie, Michelle, and Mike, on camping trips, to museums, and other fun activities. Shirley and Dale traveled extensively throughout the United States and abroad, making trips to The Grand Canyon, Yellowstone, New England, Hawaii, Alaska, and Europe. Shirley lost her beloved husband on December 8, 2005. Shirley sold her home and relocated to a new home with her son Terry, daughter-in-law Michele, and grandsons, Hunter and Cole. Shirley was happy to be surrounded by her loved ones. Shirley moved to a memory care facility as it became necessary for her to receive advanced care. Shirley was one of the first residents of The Linden at Stonehaven Square where she received excellent care. Shirley is survived by her son, Gene, and wife Karen, her son, Terry and wife, Michele, granddaughter Jamie Harris, and husband Bryan, granddaughter Michelle Shaffar, and husband Trey, grandson Michael and wife, Brooke, grandson Hunter, grandson Cole, great-granddaughters Ashley, Bailey, Lacey, Breelyn, and Addalyn, and great-grandson Bryson. Shirley’s family would like to express their sincere appreciation to the caregivers at The Linden at Stonehaven Square and the hospice caregivers from Rivercross Hospice for the excellent care that Shirley received. In lieu of flowers, donations made to The Alzheimer’s Association in honor of Shirley are greatly appreciated.

Beloved wife, mother, grandmother, great-grandmother, and friend, Shirley Mae Huebert went to be with Our Lord on March 7, 2022. She will be missed beyond measure, but will be reunited with her loved ones who preceded her on the journey to... View Obituary & Service Information

The family of Shirley Mae Huebert created this Life Tributes page to make it easy to share your memories.

Send flowers to the Huebert family.