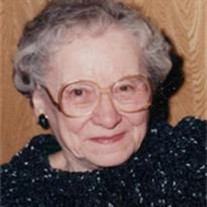 Stella Margaret Edens Â  Stella Margaret Edens was born on August 30, 1914 in Livingston County, Kentucky to Silas and Laura Sexton.Â  As the daughter of a storekeeper, she became familiar with the retail grocery business and over the years worked in several family owned stores.Â  After the massive seven state flood in 1937 rendered her homeless, she moved to Texas for one year, then on to California where she worked in her Uncle Bart Sexton’s grocery in Los Angeles.Â  There she met and married Carleton Edens.Â  About a year after their son, Curtis was born they moved to the Tulsa area.Â  Their daughter, Frances was born while living in the area of north Sheridan. Shortly thereafter they bought a small grocery and moved to the Mingo community, and their third child, Carla was born. Â  Even though Stella had been raised in a Christian home, she didn’t make the personal decision to receive Jesus as her Savior until 1948.Â  Soon she found her calling as a Sunday School teacher and taught for nearly 50 years, taking the scripture from the quarterly, then writing her own lessons.Â  As an enthusiastic supporter of Vacation Bible School, both at Sheridan Road Baptist Church and Mingo Baptist, she wrote her own lessons and Bible games. Stella was a willing worker for the Lord, no matter what the task was. Working in the Women’s Missionary Union, providing transportation for children to Sunday School and VBS, taking food to and visiting the sick, attending services 3 times a week and all revival meetings were just a few of her contributions to her church.Â  Her faith was real, vibrant and life-changing.Â  Later she was a member of Church of the Nazarene in Owasso, then Trinity Baptist in Vinita. Â  She referred to herself as a Homemaker and was thrifty, diligent and a hard worker, cooking 2 meals a day every day, sewing all of hers, Frances’ and Carla’s dresses and Carl and Curtis’ shirts during the young years of her family, despite the development of heart trouble at the age of 43. Over the years she also worked in the drapery department at the old Sears at 21st & Yale, Scotty’s Doughnuts, was election judge at her local precinct, bookkeeper for Carl and Curtis’ construction company, Edens & Son, clerked in their store, Edens DX and Quick Shop, and took in sewing as well. Â  A modest woman in her person and outlook, Stella faced widowhood bravely, never feeling sorry for herself or the troubles she had to face in life. She continued to live at their home in Mingo until the area was evacuated by the Tulsa Airport Authority in 1992, then moved to Owasso, near Frances.Â  She had a bright and intelligent mind, and kept it active by being an avid reader.Â  She loved to write poetry, play games, knit, crochet, embroider and work crossword puzzles.Â  She even constructed her own crossword puzzle and submitted it to a publisher. Â  When her health began to decline, she sold her home and moved to Vinita to live with Curtis and his wife, Carolyn for 18 months ,then on Heartsworth Assisted Living CenterÂ Â  After she fell and broke her hip and collar bone she entered Evergreen Care Center, at Baptist Village in Owasso. At Evergreen, she was loved and respected by the workers for her cheerfulness and daily traversed the hallways in her wheelchair, singing hymns as the went. Â  Known in the family for her sayings and adages, her favorite was “It’s what you do with what you’ve got that counts.”Â  It’s the one she lived by, as well as the Prayer of Serenity by Reinhold Niebuhr:Â  Â  “God grant me the serenity to accept the things I cannot change; courage to change the things I can; and wisdom to know the difference.” Â  After 96 years of being faithful and loving to her parents, then her husband, her children and grandchildren, Mrs. Edens passed on to the arms of her Savior on Tuesday, May 3, 2011 in Owasso. Â  Stella was preceded in death by her parents, sisters and husband of 43 years, Carleton (Carl). Â  She is survived and missed by her children: Curtis L. Edens, Sr. (& wife Carolyn) of Vinita, Frances Metcalf (& husband Jim) of Owasso, and Carla (& husband Joe) of Texas.Â  Also her grandchildren: Curtis L. Edens Jr. (wife Michelle), Christine Edens, Warren Metcalf (wife Gina), Judah Hoag and Jared Hoag.Â  Her great-grandsons:Â  Shawn Edens, Kyle Edens, Liam Hoag and Elliot Hoag.

Stella Margaret Edens Â  Stella Margaret Edens was born on August 30, 1914 in Livingston County, Kentucky to Silas and Laura Sexton.Â  As the daughter of a storekeeper, she became familiar with the retail grocery business and over the years... View Obituary & Service Information

The family of Stella Margaret Edens created this Life Tributes page to make it easy to share your memories.