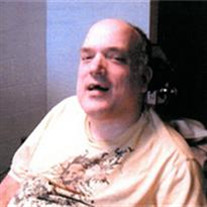 Stewart Darnell was born February 5, 1959 in Long Beach, California to Rose J. Darnell and George Rusher. He spent his early years at Rancho Los Amigos before going to live with Chuck and Jamie Stoughton. He attended and graduated high school in Hacienda Heights, California. Upon retirement the Stoughton’s moved to Eastern Oklahoma with Stewart and his foster brother, Frankie. In early 2000’s, Stewart moved to Broken Arrow and entered the Gatesway Residential Program. Stewart is preceded in death by his foster parents, Jamie and Chuck Stoughton. Despite being diagnosed with Myeloma bone cancer in March, Stewart was able to travel to meet his biological grandmother for the first time just a few weeks before his death. Stewart will always be remembered for his happy presonlaity and big smile. Stewart is survived by his grandmother, Goldie Lancaster of Mt. Home, Arkansas; uncle, Bob Darnell and wife, Sharon; several cousins of Arizona. Also from his foster family, brother, Frankie Elizalde, and Mathew and family, sister in law, Josie Michalek, sister Patricia and family. Also his family of friends and staff of the Gatesway Foundation, Jim and Ashley, who worked with him daily; close friends, Martha Kohlway and Donna Kerr. To the staff of Tranquility Hopice, their love, care and compassion can not be surpassed.

The family of Stewart Darnell created this Life Tributes page to make it easy to share your memories.