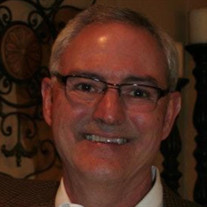 Thomas “Tom” Edward Williams Jr., 72 of Tulsa, died Friday March 26, 2021. Born January 27, 1949 to Thomas Edward Williams Sr. and Monelle Odom Williams. He attended Oklahoma Military Academy his Freshman/Sophomore year and graduated from Edison High School in Tulsa, Oklahoma class of 1967. He then graduated from the University of Tulsa in 1973 with a Bachelor of Science in Marketing. He spent his entire professional career in mortgage banking, retiring from banking in 2008. Tom opened Three Palms Wine and Spirits in 2009 and later sold in 2014. He loved the 35 years he spent with his family and friends on Grand Lake boating, fishing and relaxing on his deck overlooking Duck Creek. In his younger years he enjoyed playing softball, golfing, and snow skiing. Tom also took great joy in giving back to the community as part of the Nicholas Club of Tulsa whose members volunteered at Tulsa Boys Home and the Children’s Medical Center. During his retirement he was very active at Life Senior Services participating in Pickle Ball, teaching a creative writing class and numerous other activities while making new friends. Tom’s biggest joy was the time he spent with his grandchildren. They loved to fish, play games, dance, sing and go on Jeep rides with him. Over the last year he had found a new love in Betty Metcalf. They brought joy and companionship to each other. Thomas Edward Williams Jr. was preceded in death by: Thomas Edward Williams Sr. (father), Monelle (Williams) Neundorf (mother) and Gus Neundorf (step-father). Tom is survived by: sons Thomas “Carley” Williams and wife Carrie of Tulsa, their children Connor (17) and Caraline (15); Bryan Williams and wife Nicole of Bixby, their children Braden (13) and Maddison (8); brother, Robert (Bob) Williams and wife Paula of Tulsa and Lauren Williams (niece) of Tulsa. Memorial Services will be held at 11 am on Friday, April 2, 2021 at the Floral Haven Rose Chapel. For those unable to attend, follow the link for webcasting services: View Funeral Webcast

The family of Thomas "Tom" Williams Jr. created this Life Tributes page to make it easy to share your memories.

Send flowers to the Williams family.