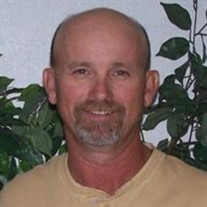 Vance Kevin Alexander, 59, passed from this life on Tuesday, March 10th, 2020 surrounded by his wife and children. Vance was born November 13th, 1960 in Belleville, Illinois to Shirley and Sam Alexander. Later meeting the man he would call Dad, Fred Gill in 1986 when he wed his mother Shirley. Vance married his love Vickie Strong on June 23rd, 1984. Vance was a very energetic man, who was always on the move. Whether it be working, taking care of his yard, or helping someone with theirs. He never hesitated to help anyone. Vance worked for the City of Tulsa for 28 years before retiring in 2014. This retirement was short lived as Vance didn't know the meaning of downtime. Being a man who had to stay busy, he began working for Berryhill Schools. He spent five years there, building lifelong friendships he cherished. He enjoyed bowling, working in his yard, frisbee golf, and fishing (even when his daughter Amy was all he caught.) Next to Vickie, his greatest love was his motorcycle. Any excuse to ride was a good excuse! He was always up to giving the grand-kids (and yes, even his grown son, Brandon) a ride around the block or two. He looked for any reason to go for a ride. To him, no amount of time he spent on his bike was wasted time. The look of pure joy and the sound of excitement he had in his voice each time he talked about or was sitting on it, is something many of us will never forget. Spending time with family and friends held a special place in Vance's heart. Especially Tim and Terri Milgate. They shared many trips together and even shared a wedding anniversary. Vance is preceded in death by his father Sam Alexander, his mother Shirley Gill, and dad Fred Gill. He is survived by his wife of 36 years, Vickie of the home. Daughter Amy Gray, and husband Mike of Tulsa. Son Brandon Alexander, and wife Mindy of Sapulpa. Son Andrew Alexander, and fiance' Barbara of Sand Springs. Daughter Chasity Alexander and significant other Michael Grisham of Broken Bow. Daughter Misty Alexander of Owasso and Son Timmy Alexander. And nineteen grandkids. Brother Mark Alexander and Wife Pam of Sand Springs. Sister Linda Alexander of Hectorville. Sister Carla Arivett and husband Bill of Coweta. Brother Tom Alexander and wife Kim of Owasso. Brother Chuck Gill and wife Dee of Garden City, KS. Sister Mary Peters and husband Jim of Golden, MO. Brother Scott Gill and wife Kim of Garden City, KS. Sister Charolette Williams of Witchita, KS. Numerous Nieces and Nephews as well as numerous Great Nieces and Nephews. Visitation will be 5-7 pm, Wednesday, March 18, 2020 at Floral Haven Funeral Home. Funeral Service will be 10:00 am, Thursday, March 19, 2020 at Floral Haven Funeral Home Chapel. ***FOR THOSE THAT CANNOT ATTEND THE SERVICE IN PERSON, CLICK ON THE FOLLOW WEB ADDRESS: THE LIVE STREAM WILL START AT APPROXIMATELY 9:45 A.M. IF YOU DO NOT SEE THE LIVE FEED, PLEASE REFRESH THE PAGE UNTIL IT APPEARS*** http://webcast.funeralvue.com/events/viewer/26128

Vance Kevin Alexander, 59, passed from this life on Tuesday, March 10th, 2020 surrounded by his wife and children. Vance was born November 13th, 1960 in Belleville, Illinois to Shirley and Sam Alexander. Later meeting the man he would call Dad,... View Obituary & Service Information

The family of Vance Kevin Alexander created this Life Tributes page to make it easy to share your memories.

Vance Kevin Alexander, 59, passed from this life on Tuesday,...

Send flowers to the Alexander family.