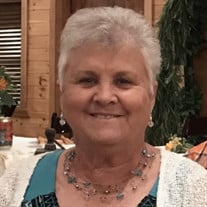 Virginia “Dianne” (Manning) Goss, 79, passed away on Sunday, November 29, 2020 in Tulsa, Oklahoma. Dianne was born on October 30, 1941 in Tulsa, Oklahoma. She was the daughter of Carl and Emily Manning. She had one sister, Sue Self and two brothers, Doug Manning and Danny Manning. Dianne was married to Jerry Thomas Goss, Sr. on March 31, 1961. They have three children Stephanie Lynn, Jerry Thomas Jr., and Wesley Bronson. They have nine grandchildren Jeremy, Amber, Colton, John, Peyton, Jansen, Cade, Karlie, and Casey. They also have six great grandchildren Christian, Callie, Cameron, Caton, Rayvan, and Phoenix. Dianne was preceded in death by Jerry, who passed six short days before her. Dianne grew up in Northwest Tulsa, roaming Reservoir Hill and the Cincinnati area in Osage County, whether it be on horseback following field trail bird dogs or on foot looking for blackberries. Her Grandpa Anderson, known as Big Dad, was an engineer in Tulsa and he built homes for all his kids on North Cincinnati. She lived there through high school. Her love of dance started early in life, being pretty snappy at tap dancing. She graduated from Tulsa Central High School. She loved cool cars that went fast like hot rods, sprinters, and Indy cars. Dianne met Jerry at a car show in Joplin, Missouri. Dianne was very involved in the 1960’s with the Jaycees in Vinita and the Tulsa Speedway family where she became lifelong friends with “Ladies of the Speedway.” Dianne was a retired secretary from Catoosa Public Schools. She was also a dedicated wife and mother. She supported her kids, grandkids, and great grandkids in all their sports, traveling countless miles to watch them play as often as possible. In her younger years she and Jerry were heavily involved in stockcar racing and rodeoing. They moved to Catoosa in the 1970’s to pursue their love of country life. She loved the water and camping at Beaver Lake and Lake Tenkiller, where she perfected her famous breakfast menu. Dianne was very active in many of her own activities including bowling, golfing, Bunko, and was always up for a trip to the lake or mountains where she thoroughly enjoyed skiing. After they retired, Dianne and Jerry spent nearly all their time on the golf course as they had a shared love of the game. She was active in the WGA at Broken Arrow Golf and Athletic Club where they were long time members. They had many friends who they traveled the country with playing golf and sightseeing. Dianne, also known by loved ones as “Mimi” will always be remembered as a cool mom, grandma, great grandma.

The family of Virginia D. Goss created this Life Tributes page to make it easy to share your memories.

Send flowers to the Goss family.