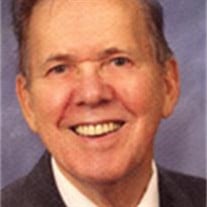 William Howard Rasbold passed away on Monday, March 7th, after complications from surgery.Â Bill is survived by his wife Ruth, son Brian and wife DeAnn, daughter-in-law Kathy, grandchildren Rachel and husband Clint Archer, Andrew, Stephen, Kathryn, Joel, Jared, Josh and fiancÃ© Chrystal Wooten, great-grandchild Carson and a multitude of cousins, nieces and nephews. Â He was born April 3rd, 1925 in Darby, Pennsylvania, of Charles Rasbold and Florence Frick.Â Bill was the 8th of ten children, all of whom predeceased him.Â He married Ruth Dettra, his wife of 58 years, on October 18, 1952 and they had two sons, Mark and Brian.Â Mark predeceased Bill in 1994.Â He is dearly loved by his family and will be missed greatly by them. Bill grew up in the Philadelphia, Pennsylvania area, and upon graduating from high school enlisted in the Army in 1943 during World War Two.Â His initial assignment was with an experimental division, the 151st Airborne Tank Company, which trained to deliver tanks to the field via gliders.Â Upon the disbandment of this company, Bill was transferred to the European theater with the 101st Airborne just in time for the Battle of the Bulge.Â His tour also included the liberation of prison camps in Belgium until his return to the United States in July 1945.Â Upon his honorable discharge in April 1946, Bill worked as a draftsman/designer for several companies before entering a 20 year career with Sun Pipe Line in Philadelphia.Â During this time, Bill received a degree in mechanical engineering.Â Bill was transferred to Tulsa in 1971 and retired from Sun in 1973.Â Bill then began his second engineering career with WillBros Engineering where he retired after another 20 years in 1993.Â Bill is a registered Professional Engineer in the state of Oklahoma.Â Â Â  Besides his family, Billâ??s interests were many and varied.Â While he enjoyed pencil sketching, model wooden ship building, and geneology, his greatest love was working around the house and garden.Â Bill would always be working on something around the house, or your house if you were not careful, fixing things even if they did not need fixing. For those who knew Bill, they will remember a kind and gentle man, a quiet man whose humor always arose when he was around those he loved.Â He was an amazing family man, and constantly made time to see his children and grandchildren.Â Bill was a strong part of this family. Â His love will be impossible to replace, and impossible to forget.Â We thank him for what he has helped make us, and his memory will endure through those who knew him.Â Â  Â Â Â Â  Viewing will be held at Floral Haven on March 11th from 2:00PM until 9:00PM.Â Billâ??s funeral service will be held on Saturday, March 12th, at 10:30am, at Fellowship Lutheran Church in Tulsa.Â The service will be presided over by Pastor Alan Fox of Fellowship and Pastor Norm Dake of Ascension Lutheran Church.Â  Bill and Ruth attended Ascension Lutheran Church ever since their arrival in Tulsa in 1971.Â In remembrance of Bill, those that wish may make contributions to Ascension Lutheran Church.

The family of William “Bill” Howard Rasbold created this Life Tributes page to make it easy to share your memories.

William Howard Rasbold passed away on Monday, March 7th, after...